An Introduction to a Special, Peaceful Place 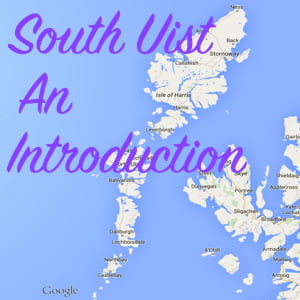 A little group of islands clings to the coast line of Scotland on the Wild West coast.  A land with its own ancient language and its inhabitants that seem to span time itself.  Exact Location – – 57.2667° N, 7.3167° W.

Over the series I will look at the island of South Uist on the West cost of Scotland, in a chain of Islands called the Western Isles.  A place where winds blow at over 100m/h, rain that doesn’t fall straight down, and a landscape punctured by water at every turn. 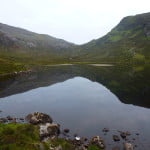 This island is also the most beautiful in the sun, and shimmers like a little jewel in the ocean of the great North Atlantic.  Situated approximately 30 miles from the mainland of Scotland,   it is reached by ferry or plane.  This little piece of rock is cut with lochs that teem with visiting bird life all year round as they make their way from one place to the other.  It hosts the greats flower show in Summer when the Machair comes to life from the wild winter storms and shows its fanciest clothes for passing visitors.

This land is visited not only by birds, but visiting golfing enthusiasts to play on the Old Tom Morris

course, by travellers interested in this little gem and its history, by returning relatives who have had to move away for work but feel the constant pull to return home.  The peace and tranquillity is felt upon arrival and the clock that dictates most of our lives, becomes a mere ornament to look at very occasionally.

The sky is big here!  Make no doubt about it!  The story tale of the chick believing the sky was falling on it’s head after an acorn hits the chicken could have been written here – albeit if there were trees from which acorns could fall from.  The sky is so big because there is only the ocean and the small hills around to give this amazing view.  The universe opens its window here at night and you can look for hours at the stars, watching as they move and dance about the sky. 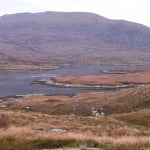 The water is cold at the sea, colder than I have ever felt, but it is also the clearest I have seen.  The soft white beaches on which to walk are amazing.  Looking through the periscope of water at the world beneath the waves is truly outstanding.  The Western Isles are beautiful and the peace is amazing.

As a series of article I will be looking to cover:

South Uist is set in a vast ocean of water!   There said it!  Although the mainland can be seen on clear days it is some distance in the North Atlantic.  So between South Uist and the Mainland is a body of water known as the Minch.  To get to the island of South Uist…

Amazing Migrating Birds and Majestic Wildlife I have already been expressing the peace and tranquillity of South Uist, but one thing that Uist is famous for with Twitchers is it’s bird life.  Yip, if you want to see a multitude of birds, all migrating through or stopping off for a relaxing break then this is…

Off to see beauty in landscape One thing you can certainly say about South Uist is that it is prime walking country!  I have managed to do quite a bit of exploring here and I can say that this little island (in comparison to a large continent) has so many nooks and crannies that you…